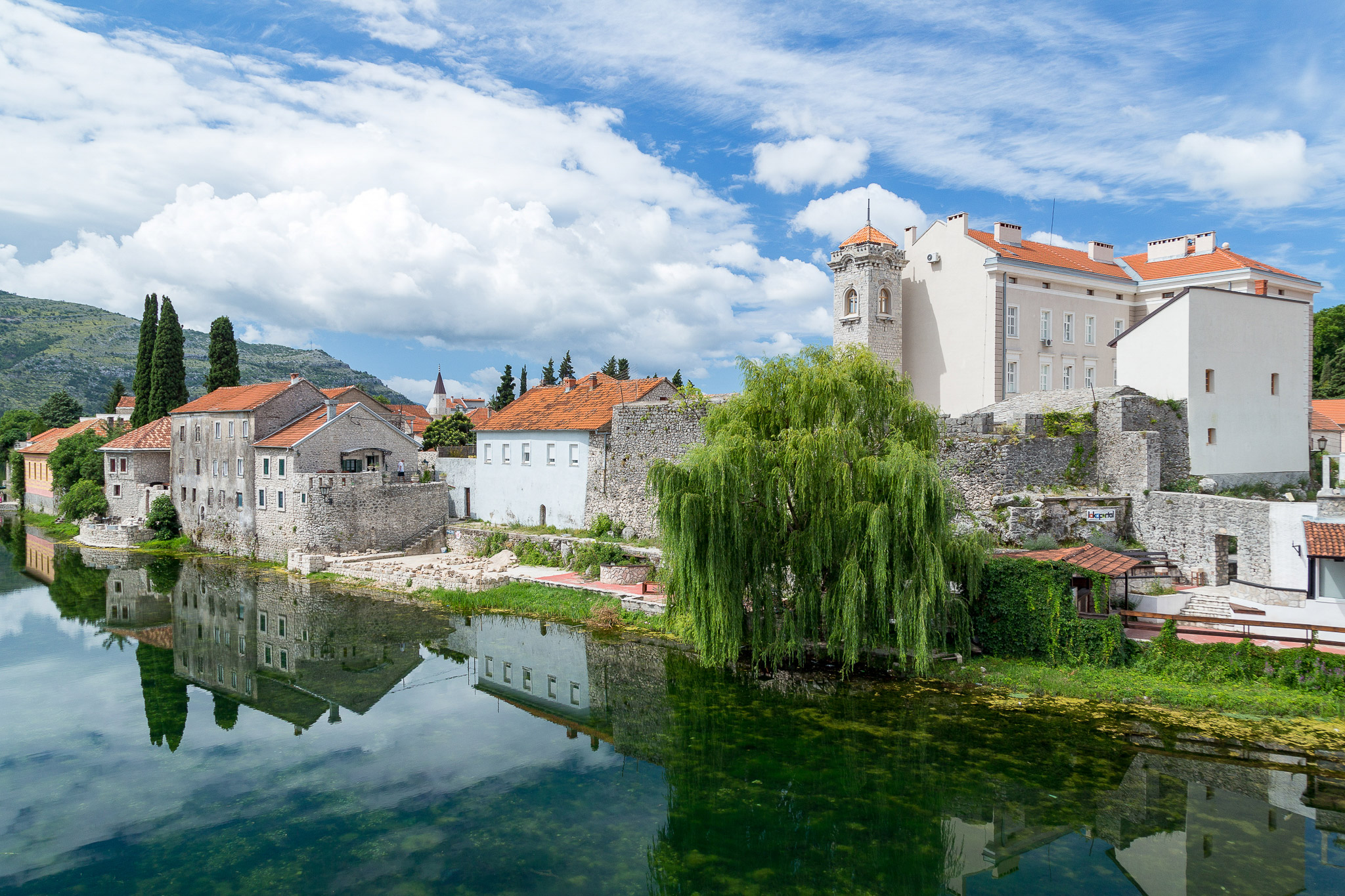 The old citizens of Trebinje claim that Banj Vir[1] was named after a Ban[2] who drowned in the deepest part of the River Trebišnjica. This legend has no historical evidence and will last as a part of folklore until some new historical document offers a different interpretation.

Furthermore, local oral tradition describes an undiscovered network of tunnels below the level of the urban settlement in Kastel (Old Town). Another story passed down for generations says that there is an underwater tunnel, built beneath the River Trebišnjica, ending on its left bank next to the present location of the hotel Leotar. There is one more legend which bears witness to the long historical context of this location on the cliffs above the Trebišnjica, near the present Museum of Herzegovina. Namely, there are daring claims that the same person had also founded Ragusa by first establishing what makes today’s Carmen, the oldest part of the Old Town of Dubrovnik, that is, by first building a fort on the cliff above the sea. Also, the Fortress Banj Vir was located on an easily defensible rock above the Trebišnjica River. This insufficiently researched story is based on the fact that the records from 1690 say that, on this location, the Ottomans found a tower not strong enough to defend the city from the Montenegrin and Venetian attacks, and therefore, had  to build a stronger defence system.  The register from 1701 attests that  the “Fortress Banj Vir” existed but there are no data about its dimensions or shape.Thus, in 1705, Osman-Pasha Resulbegović sent a copy of an edict ordering the construction of a fortress in Trebinje to the citizens of Dubrovnik.

Dr. Safet-Beg Bašagić, a Bosnian-Herzegovinian writer and scientist, claims that the fortress in Trebinje was built in the spring of 1706 and that the city of Trebinje was officially called Banj Vir. The claim is based on the original edict kept in the Oriental Institute in Sarajevo. Later on, the fortress was also called Ičhisar (Ićesar).

Works on fortification of Banj Vir continued at the beginning of the XVIII century. Those works created conditions to build the civilian part of the town within the stronghold. Not long after, in 1714, Osman-Beg Resulbegović, the Captain of Banj Vir, issued an edict ordering even better fortification to be constructed. The following year they even started to dig a moat surrounding the town.

There are no exact data on when the moat was completed, but some say that it was constructed and filled by water from the Trebišnjica River in 1715. The moat was 460 meters long, 5 meters deep and 10 meters wide. Final works on the fortification of Banj Vir were finished with construction of outer defensive walls enclosing the city in 1721. Within the fortification, Osman- Pasha built two mosques, his billet, divanhana[3],  medresa[4] and mekteb[5]. The fortification was fortified with four towers: the Ćatović’s , Landrović’s, Salahović’s and Hadžihasanović’s Towers. The protective wall enclosing the city still exists, but its parts are missing in two places: at the stone bridge and on the south side of the fortification where a new gateway has been constructed. The starting point of the construction of the walls was the Salahović Tower, towards the southwest, and it continued in a semicircle. The Hadžismailović Tower, which protected the main entrance to the city, was on the west. In front of the tower was a wooden drawbridge that was raised at night, and the wall ended with Ćatović Tabija (fortress) on the bank of the River Trebišnjica. The last time the name Banj Vir for a new fortification was officially used was in 1729, and since then it refers to a deep whirlpool that the River Trebišnjica forms not far from the city’s north gate called Malta.

Minor archaeological excavations performed on the current location of the Museum of Herzegovina only confirmed that the elevated plateau was a place suitable for living as well as for defence from the very beginning. During the archaeological excavation, a part of stone with inscriptions in Latin letters and entire sections of walls dating back from various times were found. The Museum of Herzegovina, with its surrounding objects, is on the List of National Monuments of Bosnia and Herzegovina.

[2] A governor, an honorable man