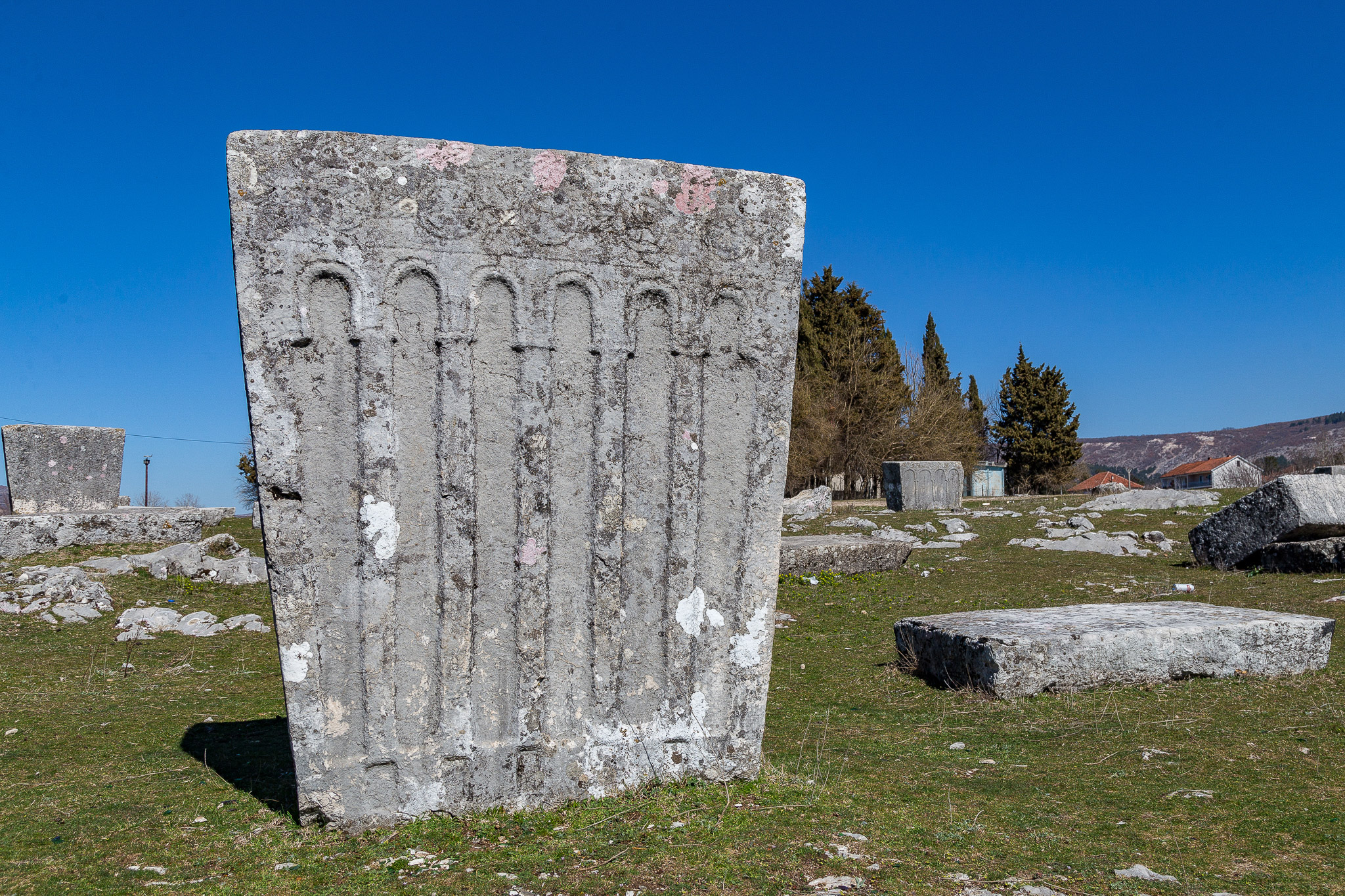 This necropolis was created in 1964 when the Institute for Protection of  Cultural-historical and Natural Heritage of the Socialist Republic of Bosnia and Herzegovina together  with other republic institutions of former Yugoslavia, decided to support the relocation of stećci[1], because of the construction of the artificial hydro accumulation “Bileća Lake” to their original location. Having been relocated to their new location on the south entrance to Bileća, the “Stone sleepers” represent the biggest artificial necropolis of tombstones in Bosnia and Herzegovina. This carefully selected collection offers tombstones typical for this part of Bosnia and Herzegovina and stands for an unique outdoor museum. It is connected with necropolis below the surface of  Bileća Lake, as well as with necropolis in the surrounding of Bileća – such as the prehistoric tumulus and the one in Grebenica near Bileća, which is listed on the UNESCO “Tentative List” as a part of serial transnational nomination.

The “artificial necropolis of stećci” is significant for the further research of the culture of stećak in the region of eastern Herzegovina and it is a part of the urban landscape of Bileća, which together with other necropolis, represent an important mark of civilization essential for  the science and culture of  Bosnia and Herzegovina.

Most experts agree that  some of them represent medieval memorial tombstones which differ from others by their typology and ornaments. As for their size, they are classified as megalithic stone blocks that could be found in Bosnia and Herzegovina (more than 60 000 of registered tombstones), as well as in Montenegro (about 3 050), Croatia ( about 4 450) and Serbia (about 2 270).

They are unique in the culture of  Europe and world cultures, they don’t resemble nor directly copy any other monuments, although some similarities with ancient monuments could be noticed. In front of the National Museum in Sarajevo, the memorial tombstone monuments are exhibited on the left, opposite to sarcophagi and other tombstones from the Roman period. This installation suggests a possible pattern used in making the first stećak. Similar exhibition can also  be seen in front of the Museum of Herzegovina in Trebinje. Each stećak is special for being unique, and in a broad sense, the name itself refers to the lying stones, stone blocks and, most importantly, all the monuments dating from the XII to XVI century similar in the rustic processing and  symbolic features.

Some early Christian and medieval remains of many churches were also flooded by the artificial hydro accumulation “Bileća Lake” during the construction of the hydroelectric power plant on the River Trebišnjica.